I’ve mentioned Luther’s last written words here before. In this post, I’d like to turn to his close friend and associate, Philip Melanchthon. He, too, has left us a fragment from just before his death on 19 April 1560 (it seems to have been written sometime around the 16th, perhaps, or shortly thereafter–it is not possible, to my knowledge, to affix a precise date to the document).

So, then: when he knew he was about to die, Melanchthon, in a moment of apparent self-exhortation, made a list: a list of reasons that he should not be afraid to die. The list is divided into two columns, reasons “on the left” (that is, evils from which he will depart by dying) and reasons “on the right” (blessings into which he will enter by dying). 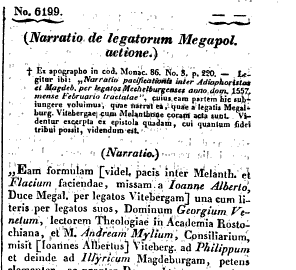 The reasons why you should not shrink back from death, written by Philip Melanchthon on a small piece of paper a few days before his death.1

On the left: You will depart from sins. You will be freed from tribulations, and from the mad rage of theologians.

On the right: You will come into the light. You will see God. You will gaze upon the Son of God. You will learn those wondrous secrets which you were not able to understand in this life: why we were created as we were; what the union of the two natures in Christ is.2