Some more on Melanchthon’s poetry, while we’re on the subject. Below is a poem from (perhaps) 1540. 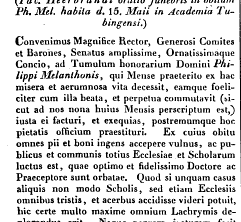 “Christ’s Speech (from Psalm 2)”
What madness to rouse arms against the heavenly powers!

Man’s impiety will not have a happy issue.

and grants it to me to bring new commands.

For the Father himself says, “My Son, my highest pleasure,

will justly be my heir of the whole world.

Let him who follows the victorious standards of this King

laugh in safety at the threats of Fortune.”

The greatest Father commands his Son to spread these commandments–

and they are not empty–throughout the world among the peoples.

You, peoples, offer frankincense to the Son of the highest Father;

whoever trusts in this Prince will be saved.1