We warmly thank the publisher for providing a complimentary copy of this book for review.

As with the early modern period, there is much about Luis de Molina that we really don’t know. In hopes of shedding some light upon this enigmatic figure, Dr. Kirk MacGregor has written the very first monograph on Molina. Beyond simply introducing the reader to the life and works of Molina, MacGregor hopes to make a case for why Molina should be reckoned a catholic theologian. MacGregor is of course not hoping to prove that Molina, despite being a Jesuit, was a Roman Catholic theologian. What he hopes to show is that Molina should be ranked among the giants from whom the body of Christ has much to learn—among the likes of Augustine, Aquinas, Luther, and Calvin. Indeed, MacGregor hopes to see Molina’s ideas dealt with seriously, and embraced by Roman Catholics, Protestants, and Eastern Orthodox Christians. That MacGregor has a deep admiration for Molina is not in doubt. With William Lane Craig, he believes that Molina’s development of middle knowledge is “one of the most fruitful theological ideas ever conceived.”

In Chapter 4, MacGregor sketches out Molina’s application of middle knowledge to the doctrine of divine providence. Per MacGregor’s reading, Molina wants to affirm two things he believes are clearly affirmed in Scripture: God’s absolute sovereignty over all things, and libertarian free will. Perhaps the best way to explain Molina’s harmony is to begin with his understanding of human freedom. MacGregor provides his readers with this quote from Molina:

MacGregor explains Molina’s notion of freedom, “When applied to humans, it denotes their unconstrained ability to choose between opposites in both the physical and spiritual realms. For Molina, no circumstances exist that could determine a person’s choices, and if a person chooses to do a particular thing, she or he could have done otherwise or could have refrained from acting at all.”3

But if nothing can determine how human beings act, how can we say that God is sovereign over human actions? Before God decreed the creation of this world, he saw every possible world and an infinite combination of free actions and random events that could be. God, using this inexhaustible source of knowledge, decreed the creation of one universe. It is in this way that God is sovereign over everything, including free actions. Indeed, MacGregor concludes that on Molina’s account:

God is actually more sovereign than he is on Calvin’s doctrine of divine providence. For, as Molina insisted, it is obvious that a God who can infallibly control every libertarian free creaturely action and random natural event without compromising that freedom and randomness is more sovereign than a God who can only control every creaturely action or natural event if creatures lack libertarian freedom and natural processes lack randomness.4

Based on this sketch, one can already have a sense of how Molina uses his conception of middle knowledge to reconcile predestination and libertarian free will (the focus of chapter 5). Molina, along with the mainstream of the Christian tradition, affirms that because of sin, man is unable to in any way turn towards God. Thus, in order to maintain libertarian freedom, Molina believes that God, after the fall, provides everyone with sufficient grace to turn to him.

This, however, does not negate God’s absolute sovereignty over who is saved and who is not. God, in choosing what world to instantiate, knowing full well who would turn to him in repentance, and who would reject his gift of grace, sovereignly chose who would be saved and who would be damned. According to Molina, God does not choose to save people because he foreknows that they will, would, or could, have faith in him. Furthermore, God does not reprobate people because God foreknows they will sin and reject him. Rather, God’s very act of creating one world instead of another is itself the act of predestination and reprobation. For, as stated earlier, in this act of creation God knows who will and will not be saved, and God could have created a different world where a different set of people are saved.

In dealing with all of these issues and more, MacGregor writes clearly and manages not only to put Molina in conversation with his historical contemporaries such as Luther, Calvin, and various Dominicans, but also with important figures of our own day such as Alvin Plantinga and William Lane Craig (among many others). Despite of all the virtues of the book there are some important questions that must be asked about MacGregor’s project and his reading of Molina. For if MacGregor’s reading of Molina is accurate (there are reasons to question this), Molina should not be reckoned a catholic theologian.

To begin with, MacGregor’s Molina is a theologically rebellious Roman Catholic. Early on in the book MacGregor writes, “much of Molina’s thought stood in direct opposition to the Catholicism of his day (though not to modern Catholicism).”5 This statement might give some the impression that  MacGregor reads Molina as being against certain practical abuses of the Roman Church while at the same time faithful to Rome in his theology. MacGregor has a far more radical Molina in mind. Indeed, he takes Molina to disagree with Trent on the nature of grace and justification.6 Molina is even depicted as holding, contra Aquinas and Trent, to the protestant distinction between justification and sanctification.7 In this context, MacGregor notes that on the contemporary Catholic spectrum Molina’s doctrine is “to all appearances, identical to that of contemporary Catholic Theologian Peter Kreeft.”8 But given the fact that Rome dogmatically proclaims that she cannot change in theology, such a statement, if correct, far from establishing Molina’s Roman Catholic orthodoxy instead brings Kreeft’s into question.

Perhaps the most important reason why one should be concerned with MacGregor’s project is because his Molina rejects the classical and catholic doctrine of God. First, Molina is portrayed as rejecting the doctrine of divine simplicity. MacGregor writes:

In response to Báñez and Lemos’s second charge that middle knowledge entailed divine passivity, Molina asserted that it does only if one conceives of God in a Thomistic vein as pure actuality, the determining cause of all that occurs. But Molina insisted that one should abandon the doctrine of pure actuality as philosophically incoherent and as contradictory to Scripture. For if God is pure actuality, then God’s attributes are not distinct from one another. But surely, for example, God’s omnipotence and God’s benevolence denote two distinct properties, each of which is irreducible to the other.9

This passage makes it clear that Molina believed that God’s attributes are distinct. To use MacGregor’s example, God’s benevolence and God’s omnipotence are, in God, two separate properties. The doctrine of divine simplicity, on the other hand, teaches that there is absolutely no division or separation in God. If MacGregor is right, then Molina believes that there is a real division between God’s attributes. It is unfortunate that MacGregor does not point us to the passages that lead him to believe Molina held to such a separation within God’s properties, and thus within God himself, because it is very hard to believe that Molina would have avoided major controversy had he rejected divine simplicity. To the contrary, there are good reasons to believe that Molina actually held to divine simplicity. In his commentary on Aquinas’ Summa, Molina writes: “Deum simplicem esse omnino, est de fide.”10 Which en Ingles says, That God is altogether simple is of faith. The rest of the passage indicates that he agreed with Aquinas on simplicity. I hasten to add that it is by no means MacGregor’s intention to portray Molina as denying divine simplicity. In fact, MacGregor does not think that Molina’s view on the separation of the divine attributes is enough to come to a conclusion about Molina’s view on divine simplicity. But he leaves those of us familiar with the state of medieval and post-Reformation dogma with a clear implication.

For those who want to maintain the classical and a catholic doctrine of God, MacGregor’s portrayal of Molina rejecting the notion of God as pure actuality should also be troubling. In classical theism the idea that God is pure act expresses the perfection of God. It is also tied to the notion of God’s immutability.11 In God there can be no change, there can be no motion from potentiality to actuality. There is no way that God can become other than how he is. That being said, there are very good reasons for thinking that Molina did not deny that God is actus purus. Molina, for instance, affirms the following: “sed in Deo nihil est, quod talis potentiae rationem habeat; cum ipse sit primus actus, atque adeo purus.”12 Which reads, but in God there is nothing which has the nature of such a potentiality since he himself is the first actuality and therefore pure. Perhaps more decisively, Molina makes the following statement.

First, with reasons it shall also be shown that what is changed is in potentiality to that thing to which it is changed, and it is granted that anything in composition, even with itself, is changed to something: but God is pure act and entirely simple.

To me it seems very clear that Molina embraced divine simplicity and God as actus purus. What is not clear to me is why MacGregor discusses Molina in the way that he does. It is entirely possible that Molina is inconsistent, but there are good reasons to think that such inconsistencies would have been major problems in Molina’s day, and public problems at that.

While MacGregor’s portrayal of Molina’s life and thought is certainly intriguing and presents a compelling challenge to the common understanding of Molina’s views on predestination, his portrayal of Molina’s doctrine of God is troubling. It is troubling because MacGregor wants to make a case for Molina as a catholic theologian (on par with Calvin and Aquinas—if not superior to them), while at the same time portraying Molina as someone who rejects key tenets of the classical doctrine of God. It is also troubling because it is not clear at all that Molina was, in regards to his views on simplicity and God as actus purus, nearly as radical as MacGregor attempts to demonstrate. On the contrary, Molina, in this regard, seems to be far more orthodox, and dare I say, catholic. 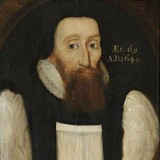 Jonathan Roberts hails from Aguascalientes, Mexico and is currently working on a MA in Philosophy.

I’m thankful for this fair-minded look at Molina. I have just concluded a study of the Jesuit Edmund Campion (tortured and then executed by Queen Elizabeth I in 1581 on false charges of treason). His own irenicism was on display both in Prague, where Protestant and Catholic coexisted in peace for some years to Campion’s satisfaction, and in England where, as a hunted fugitive, Campion was one of the few Jesuits to openly deplore the persecution (his word) of Protestants under Queen Mary I. Gerard Kilroy’s superb new Campion biography sheds much light on these matters.